anyone else but you 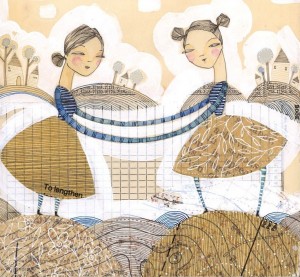 I was making myself a cup of tea downstairs, singing insane songs to Qyzen Qytten and generally perking up a bit (following an hour of feeling on the verge of tears with no apparent contributing factor) when I realised I could hear the most annoying thumpthumpthump of music. Pesky chavvy/ette neighbours in their pimped-up cars, thought I. It transpires it was my music, upstairs. The Killers Cowboy’s Christmas Ball followed closely by Coldplay’s Paradise, for the uninterested.

There’s a woman at work whom I find difficult. I’m not sure if it’s because I’m ultra-shy, too quiet, a bit ADD, slightly aspie or just because something about me turns folk off, but I find lots of people difficult. Those who are too loud, those who just talk about themselves constantly, those who blatantly believe themselves to be superior – to the extent that they’re patronisingly blunt, those who just won’t let me sit in peace on the bus … *sigh* … It isn’t that I don’t try. I can tune out the loud people, switch off and nod in appropriate places when talking to the narcissists, ignore the superior bits of the superior people and smile unengageingly at the passengers who want to indulge in small-talk on the bus.

Heavens! Whilst at work I can engage pleasantly with students whom I wouldn’t necessarily want to meet in a dark alley; it isn’t as though I don’t know how to get on with folk, even if I have to pretend. I’m a good actress, although if I genuinely like you it is probably very apparent (and I do genuinely like lots of different people). But I find it nearly impossible to even pretend when I’m around this woman. Every smile I give her feels like a grimace, every conversation feels forced and when I walk into the staffroom I hope she’s not there.

I have realised why I find her so difficult … she is me. Or I am her. We’re just too similar. It was really drummed home when I discovered that her teenage son has my favourite (unpopular and uncommon) name for a baby-boy (may I one day be blessed).

Which just sounds pretty stupid when it’s black on white instead of in my head.

As of Monday I can now say, ‘Hello!‘ in Russian. I have, of course, forgotten the word already though.