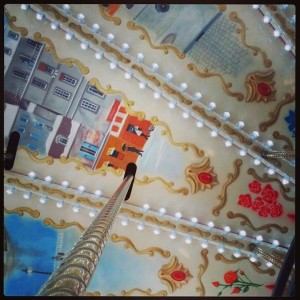 About five years ago I had a grumble about having to spend a weekend in a cold caravan with a girl I’d never met before.  I was pretty livid about it actually. I didn’t want to meet her and I certainly wasn’t going to like her. The lividness hid my anxiety and panicky-ness, but the weekend wasn’t too bad and I stated on my blog that the girl ‘was quite nice actually.’

That girl became known as GiL and in August I shall start calling her (privately in the virtual world, not in person) YASiL.  She’s going to be Yet Another Sister-in-Law.

GiL is completely different to me in so many ways.  She’s ambitious (she’s a headteacher, I gave up teaching), well educated (she has a BA and MA from Oxbridge, I only made it to a former polytechnic), very popular (she has a HUGE circle of friends, I’m a bit of a loner), chatty (she could talk the hind legs off a donkey, I find small-talk really uncomfortable) and a risk-taker (she’s up for anything, I cringe at the thought of the spotlight).

But despite (or perhaps because of) our differences she has become a really good friend to me. So when I was invited to share in her (it’s a surprise!) Hen Weekend I umm’d and ahh’d a little bit and then agreed to go. Every Hen party needs a quietly sane one, eh?

We went to Paris for a night, travelling by Eurostar and staying in a quaint little hotel near Place de Clichy.  And I had a thoroughly fabulous time.  I don’t know what her friends thought of me (and whether their Fb friend requests were purely so they could see the photos I took) but I’ve realised that I don’t care. I ate with them, I drank with them, I slept with them and I said a few funny things … but it was just a weekend and the person who truly mattered enjoyed my company and was happy I was there.

I think I’m getting all grow’d up. It brings tears to my eyes.

So anyhooha, Paris was cool.  I’ve been before of course, and I don’t find the place very exciting.  It’s not my favourite city in the world, but it’s nice. Having arrived and checked in (we had a heated toilet seat in our Junior Suite … how swish) we meandered down to a local brasserie where we indulged in onion soup and wine.  An excellent combination. A quick trip on the Metro took us to the Eiffel Tower and we played on the carousel. I’ve never been on a carousel before; I was a little disappointed that my horsey didn’t go very high, didn’t go very fast and didn’t do a Mary Poppins on me.

Having exhausted our inner-children we fattened our bellies with a dinner cruise on the Seine.  GiL provided the entertainment (the Japanese tourists will be talking about it for months) with silly little forfeits and the waiter struggled to understand the concept of vegetarianism. Our token vegetarian had a bowl of mashed potatoes and two meat-free starters.  The mash turned up just before the dessert.  However, my food was divine.  I missed Notre Dame.  The last time I went to Paris I went on a crusie along the Seine and missed Notre Dame.  One day I might actually get to see it. Heavens!

We took our stuffed bellies back to the hotel and dressed ourselves up (little black dresses, heels and masks) for the highlight of our stay; a show at the Moulin Rouge.  Oh my goodness, it was cheesiness personified.  Seriously, it was SO cheesy that it was just amazing.  The waiters were grumpy, the Champagne was drinkable and the place was packed. And there were BOOBIES GALORE! I had no idea what the backstory of the show was (it was all sung in French) but the flamboyant costumes, the fixed smiles on the faces of the dancers and the cute little surprises (snakes!) made the whole evening completely brilliant. I don’t know if I’d go again (I might take Blokey, just so he can enjoy some boobies without being scolded for fixating on other women).

Of course, waiting on Parisian street corners at 1.30am whilst one of the Hens buys a forgotten toothbrush from a 24 hour pharmacy isn’t the best thing to do.  I’d recommend it only if you’re in a biggish group and able to ignore the unwelcome advances of the sort of unsavoury men who also wait on Parisian street corners.  If it becomes too uncomfortable you can take shelter in the aforementioned pharmacy, but be aware that unsavoury men will be queueing in here for their condoms.

We all slept well that night. Perhaps I snored.  Maybe I farted. I was too zoinked to know or care.

We had brunch in a cafe near the Gare du Nord before whizzing home on the Eurostar having failed to catch a glimpse of the Paris marathon. 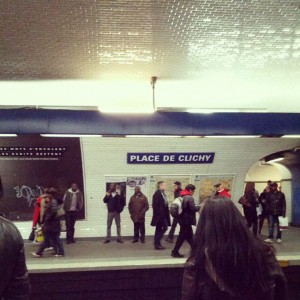 Sultriness above our heads in bed 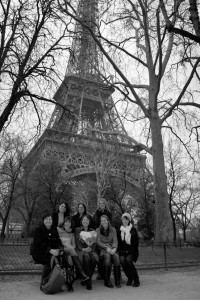 A brood of Hens 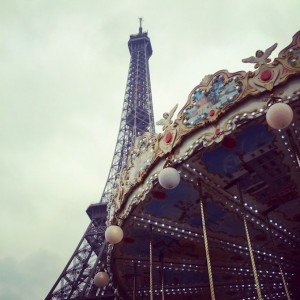 The Eiffel Tower and the carousel 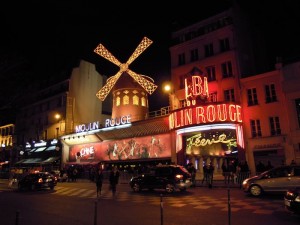 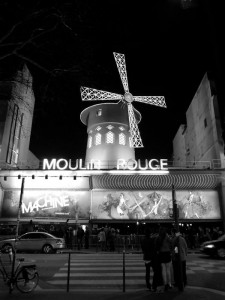 The B2B left her heart in Paris (she carried that balloon with her all the way from home and it chose to scarper as we left the hotel!) 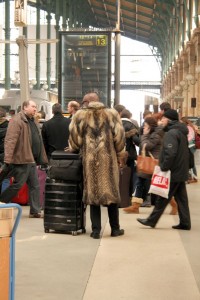 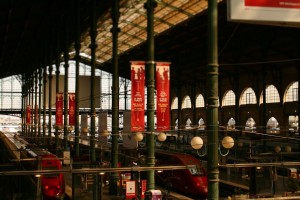