Tales of my MiL 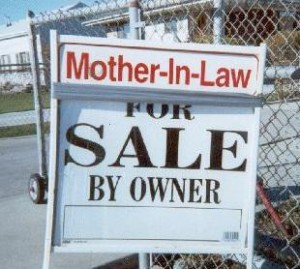 You have met my MiL before. She’s the woman who attracts bitterness and negative thoughts.  She oozes food from her pores and embraces arguments with people who are merely doing their jobs.  Her way is the Right Way (and please, don’t forget it).  She sits atop a goldmine, yet cuddles her bag with a ferocious glare when it’s time to pay the restaurant bill.  She has no friends and never does anything.

When we saw her yesterday she didn’t disappoint. She rarely disappoints.

Yesterday’s offering to the gods of Oh, woe is me came courtesy of the impending marriage of BiL and YASiL.

I don’t understand, she seethed, why we have nothing to do with the wedding.

Blokey is going to be an usher.  I’ve been asked to do a reading [whoa, where’s my comfort zone?].  What more does she want?  I later said to Blokey that if she wanted more input into the wedding perhaps she should have had a daughter. Or maybe offered to donate some of the money which just sits gathering dust in her many bank accounts.

When Blokey and I married, BiL was Best Man.  We had a small, family only, intimate ceremony so it made sense.  BiL and YASiL are inviting one hundred guests to the ceremony/wedding breakfast and BiL has asked his best friend of many (many – since school) years to be his Best Man. This wasn’t an issue for us.  Blokey doesn’t like talking in front of lots of people (the speech) and he didn’t want to have to organise a stag do (he’s not very good at coming up with ideas, coupled with our life of not really knowing how Our Kidney is going to behave) and well … he just didn’t really care.  But I think this is the MAJOR issue for my MiL.

She has this ‘thing’ about family.  Blokey doesn’t have a big family and those that do exist don’t see each other very much.  There are a lot of oldies (aunts and uncles of my beloved FiL for the most part), most of whom I’ve never met, and Blokey and BiL probably haven’t seen them since they were nippers in short trousers.  She insisted that BiL and YASiL sent them invitations and then made sure they received them.

Who does she think she is?

She’s having an outfit made for the wedding.  It’s costing her five hundred smackeroonies and a little part of me hopes that it’s truly horrendous (because I am the evil DiL.)

Nearly every year since Blokey and I have been together we’ve spent New Year’s Day with my MiL (and my FiL before his untimely death … why, oh why and please come back and all that jazz). When we get into routines with my MiL (and a routine is established after a thing has been done once) she expects it’s going to happen.  She doesn’t ask, she simply assumes.  I have worked hard to break many routines (I’m struggling with the trips to CigaretteTown in Belgium, but I WILL get there) and this year I am (we are) breaking the New Year one.  We’re going to London, to stay in a fancyish hotel near Buckingham Palace.  We know that she’s going to grumble and we’re actually scared to tell her.

How ridiculous are we?

Tomorrow we’ll be spending the gloriously sunny Bank Holiday Monday cooped up inside her cigarette-fragranced, stinky house.  And yes, we are prepared to take bets on how many minutes we’ll be there before she moans.