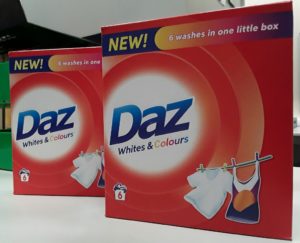 I knew a bloke called Daz once. I think it was short for Darren. He had ginger hair and taught Geography at the same school as me in Essex.

This is not about *that* Daz.

So, meet Daz. Famous for doorstep challenges and random celebrities insisting that random strangers reveal their knickers to the entire nation.

As a SuperSavvyMe Savvy Member Whatsit Thingy, I was one of thousands picked to sample the delights of new Daz for Whites and Colours. I even got some samples to give away, in return for answering a few questions and filling in a few conversation reports online.

What can I say?

Well, it smells really amazing. What with it being damp and miserable outside, I’ve had to do a fair amount of drying indoors; returning from a hard day at work to a house which smells clean, fresh and just so jolly nice, is a big bonus. It also made my whites really white. I’m not just saying that so that they think I’m a nice person who never writes anything negative … No, it really does. I mostly noticed it on my mattress protector which just seemed to glow, like virgin snow sparkling under a bright winter’s sun.

I *think* I’ll continue to buy it, at least for as long as I have some money off coupons. It is a bit pricey to buy and Aldi’s own brand is so much better value for money, even if it doesn’t quite get my whites white enough.

Thank you Daz, for my shiny, lovely smelling, clothes and sheets and towels and stuff.